Discover the diversity of Kagawa Prefecture 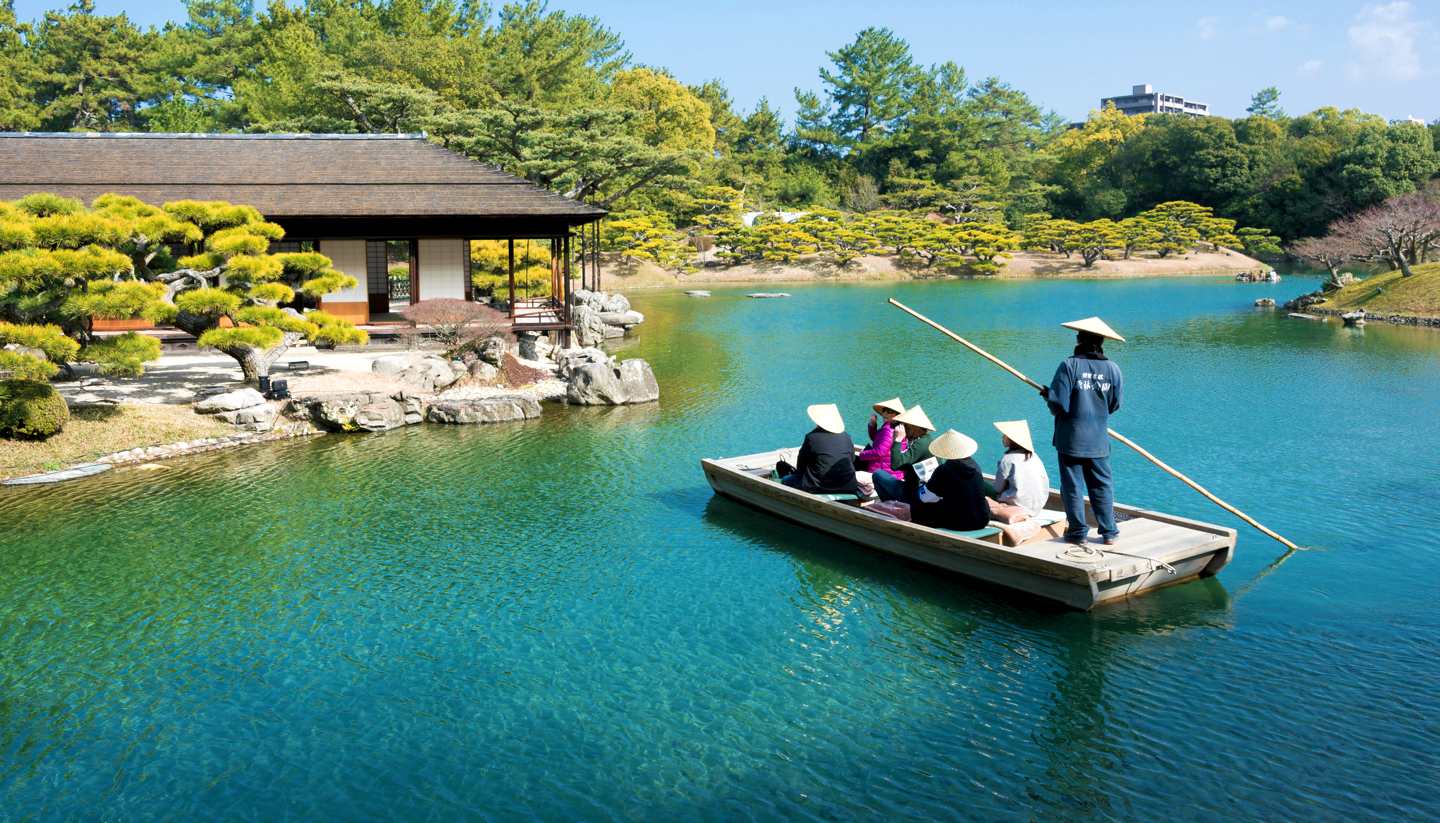 The pretty Kagawa Prefecture and its Shodoshima Island are well worth a trip, as we explore Kagawa's delicacies and cultural highlights

Where is Kagawa Prefecture?

Kagawa hugs the north-eastern coast of Shikoku Island and faces the Seto Inland Sea. While it may be the smallest prefecture in Japan by area, its capital Takamatsu is the largest city on Shikoku.

The prefecture also includes an archipelago of 24 inhabited islands of various sizes nearby. Among them, Shodoshima is a popular holiday destination for domestic tourists, thanks to its warm climate, lush olive groves, traditional soy sauce village, and other cultural highlights. 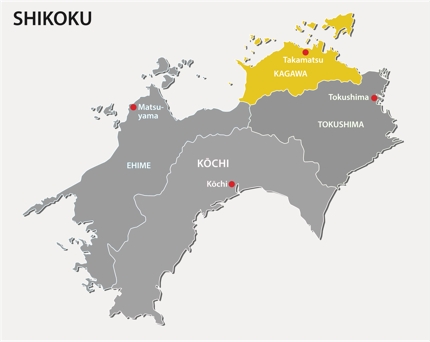 Kagawa is within easy reach of Okayama in western Honshu – daily bus and train services connect Okayama and Kagawa’s capital Takamatsu, with many of them taking you across the scenic Seto Ohashi Bridge, which is a series of suspension bridges spanning the Seto Inland Sea.

Alternatively, you can fly to Takamatsu from Haneda or Narita airports (both in Tokyo), as well as from Naha on Okinawa Island.

No trip to Kagawa is complete without checking out one of its 600 udon restaurants, as this is the birthplace of Sanuki Udon, which took its name after the prefecture’s former name. Sanuki is probably the most popular type of udon noodles in Japan today, and the secret is said to lie in the type of wheat used, one that is starchy and can produce excellent gluten, giving Sanuki Udon its distinctive firm but chewy texture.

In the past, udon makers here would use wheat grown locally but high demands have seen Japan import 90% of its wheat from Australia. While Sanuki Udon is produced throughout Japan today, foodies still come to Kagawa for the most authentic version. 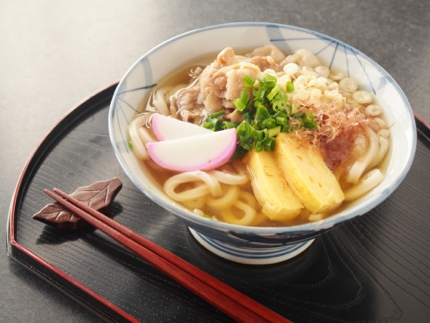 Enjoying a bowl of udon in Kagawa

Kagawa is also an important soy sauce producing region, with over half of its breweries located on Shodoshima Island. Many of them continue to use traditional recipes that have been passed down for 400 years.

Yamaroku Shoyu is one of the most iconic of all the producers. Under the guidance of Yasuo Yamamoto, the fifth-generation brewer, it continues to make unrefined soy source the old-fashioned way. The process involves fermenting shoyu moromi (soy sauce mash) in kioke (large barrels made of cedar slats and held by bamboo pins and giant bamboo hoops). The cedar slats are hosts to millions of living microbes, which aid the fermentation of soybeans and allow the mash to mature naturally. This type of fermentation process is expensive and labour-intensive – it takes four times longer than a standard factory production – but the rewards are immense, you get a richer and more flavourful soy sauce, one that is unmatched by any mass production products.

Yamaroku also serves a unique treat on-site – ice cream drizzled with soy sauce – it may sound daft, but when you taste the gratifying blend of sweet and saltiness together, you are left wondering why you haven’t thought of that before. 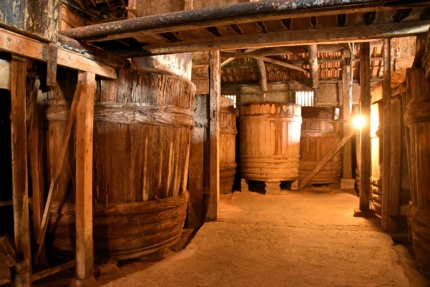 The fermentation room at Yamaroku Shoyu 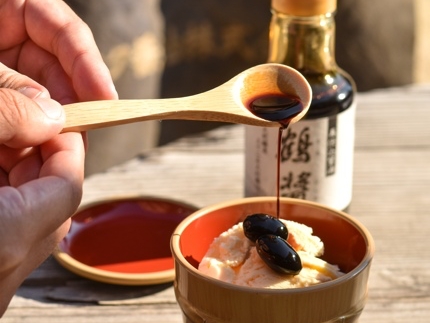 When olive saplings were introduced to Shodoshima in 1908, few would have guessed that they could go on to thrive and enjoy huge success. Thanks to the warm climate, low rainfall and well-drained soil, the island is now the leading olive producer in Japan, and in the process, the olive industry also spearheaded the development of other sectors, most notably olive-fed Wagyu beef and olive-fed farm-raised Yellowtail, which are now prime products commanding top prices.

To get the best olive picking and tasting experience, head to Shodoshima Olive Park – you can’t miss this place, as it has a striking whitewashed windmill sat on a small hill overlooking the sea. Within the park, the well-tended olive groves and fragrant herb garden provide a green corner of peace and tranquillity. But there is also a fun side – the park was the setting of the animated movie Kiki’s Delivery Service, which features a young witch using her magic broomstick to make a living by delivering goods. Today, you can borrow a broomstick for a photo-op, just like how Kiki was seen in the movie. 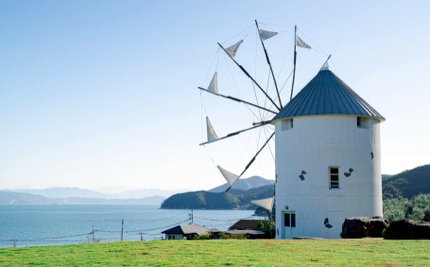 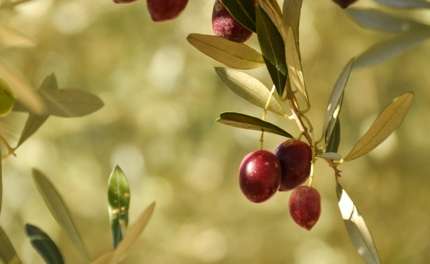 Olive picking at the park 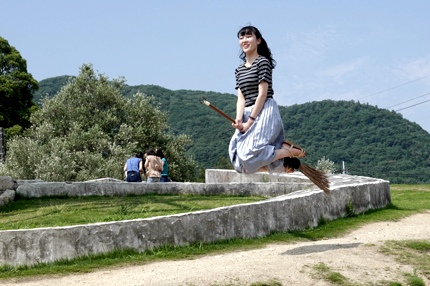 Kagawa is an important pilgrimage destination and has a fair share of shrines and temples gracing its lovely landscape. If you can’t decide which one to start with, we recommend Kotohiragu Shrine on Mt Zozu. Here, pilgrims climb 785 stone steps to reach the shrine’s main hall, and further 583 steps to pray at the inner shrine.

Notably, Kotohiragu is the head shrine of a collection of Japan-wide Kompira shires, all of them are dedicated to sailors and seafaring. Before you leave, check out one of the shrine offices and purchase a Kofuku no Kiiroi Omamori – ‘yellow charm of happiness’ in a bright yellow silk pouch, which is meant to keep the carrier safe and sound. 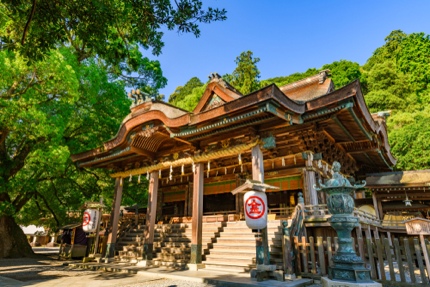 Designated a ‘National Treasure’, Ritsurin Garden features six spring-fed ponds, 13 landscaped hills, and some 1,000 pine trees that have been carefully pruned and maintained by skilled gardeners. Keep a lookout for Neagari Goyo-matsu Pine, a Japanese white pine that was a miniature bonsai tree in 1833, but is now a strong, magnificent tree near the tea house. 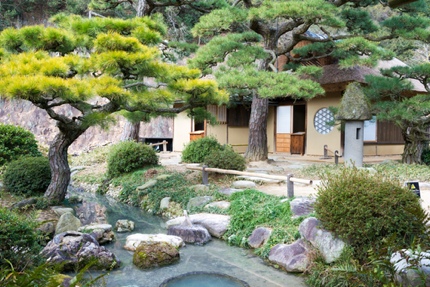 Kagawa’s many museums certainly put highbrow tourists at ease. The Kagawa Museum in Takamatsu is the obvious choice for visitors with a keen interest in Japanese art and history, while the Kinryo Sake Museum in Kotohira delights fans with its long brewing history and Japanese sake culture.

If you have a passion for local folklore and are ready to be transported to an imaginative land where ghosts and goblins live, check out Yokai Art Museum on Shodoshima Island. Yokai is an umbrella term for supernatural creatures who are born out of vivid imaginations, and this museum takes you on a journey to explore the intriguing history of yokai, including how they came to be featured in artworks and prints during the Edo Period (1603-1868) and how they grow into a subject of entertainment today. 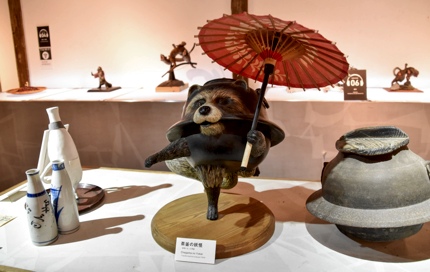 The Yokai Art Museum consists of a network of buildings and old homes dotted throughout the neighbourhood of Tonosho. Visitors are encouraged to grab a map, download the museum’s app, and explore the district, along with the fascinating, enchanting, and at times spooky world of yokai at their own pace.

Alternative activities to spice up your Paris visit

The 12 weird but wonderful wellness retreats

19 of the best British seaside towns and holidays

Bathe thyself: Searching for the ‘Kneipp Cure’ in Germany